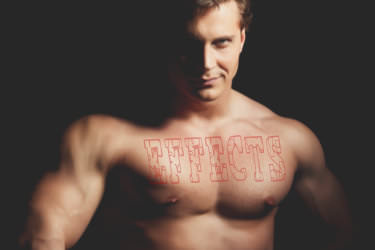 Creatine won’t make you stronger by itself.

Supplementing and sitting on the couch will not make you a big muscle man. It will not allow you to go to the gym and bench press 250 pounds when your previous max was 200 pounds. In fact, it won’t initially help you at all with your one rep max because for that lift you will use only stored ATP (energy).

Creatine is a vehicle the body can utilize to quickly regenerate ATP. We all have creatine within our muscle tissue. The goal of supplementation is to increase creatine levels to their maximum, thereby allowing for more efficient (quicker) energy regeneration (see the Creatine Main Page for further discussion on this process).

The Actual Effects Of Creatine

While you probably won’t experience any effects of creatine on your first lift, the effects can start kicking in with your second and subsequent reps. While you may have only been able to bench press 5 reps at 180 pounds without supplementing, you may be able to do 7 or more with it as the extra creatine has allowed you to regenerate more energy.

Additionally, the additional phosphocreatine will rebuild your ATP stores quicker after an exercise set and allow you to lift heavier in subsequent sets. 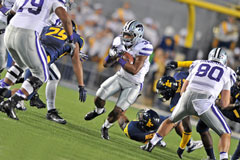 Competitive athletes will experience similar creatine effects. An offensive lineman in a football game, for example, will not improve his chances of fending off the initial charge of a defensive lineman but if he can manage that, the effects of creatine can help him to sustain his block as the play progresses.

Similarly, a sprinter won’t become faster off the blocks but, by utilizing the additional creatine levels created by effective supplementation, his body can regenerate energy faster and keep his legs pumping at a higher level than otherwise possible as the race continues.

If It Doesn’t Make You Stronger, How Exactly Does It Help Build Muscle Mass?

Misinformation about the effects of creatine includes the contention that it actually builds muscle for you. Part of the reason for this misinformation is that users will typically immediately put on weight when beginning a supplementation regimen.

This weight gain, typically between 1 and 7 lbs., can be attributed primarily to water being drawn into the muscle cells to support the additional levels of phosphocreatine and not gains in muscle tissue. It can make your muscles bigger but this isn’t a result of new muscle tissue.

This weight gain is not permanent and will go away when supplementation ceases. 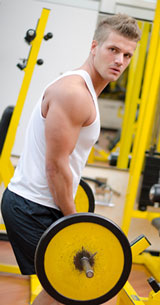 The main ability of creatine to aid in the muscle building process occurs in an indirect way. With the basic knowledge that muscles grow in response to the stress you put on them, that they are broken down with weight training and then rebuild themselves to better be able to handle that stress in the future, it follows that the greater stress or intensity you are able to put on them during a workout the faster this process will occur (the faster the muscles will grow).

This is where the benefit of creatine supplementation is clear: By allowing you to train harder and more intensely the muscles will become stronger faster and your goals achieved quicker than would be possible without supplementation.

While the water weight gain will disappear, the gains you make in muscle while supplementing will not be affected by stopping supplementation.

Don’t underestimate the power these indirect effects of creatine supplementation can have on your mass building goals. They can, in fact, be quite dramatic when you supplement correctly and then train and eat properly.

There is also the potential of creatine to aid in protein synthesis (the actual building in muscle), in the production of hormones and several other muscle building factors. Some evidence exists to support these potential effects but, for the most part, these creatine benefits remain largely educated theory.

Sounds great, but what about the side effects?

The side effects of creatine have been extremely overblown. That isn’t to suggest that legitimate concerns don’t exist, just that you have to go beyond mainstream media sensationalism if you want an accurate picture of the dangers of creatine supplementation.

Check out the article, Creatine Dangers: A Look At The 7 Most Worrisome Side Effects.

Find out what whey is, why it is so good for muscle building and how to effectively supplement with it.

Find out about the different muscle fiber types and how to target and use progressive overload to force them to grow.