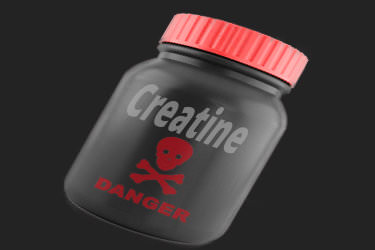 Ut oh. Creatine dangers are amongst us. If you pay attention to the media, you are probably scared to death.

The media loves to report on creatine risks. If there is even a hint that it could possibly be involved in the death or medical ailment of an athlete, they jump all over the story.

When it is later shown that creatine played no role in the story, they don’t exactly report that with the same enthusiasm.

Creatine is a hot topic these days. It is a hot topic because it is a rare example of a supplement that actually lives up to much of its hype: It works.

Extensive research has been conducted and found supplementation to have no serious side effects.

When something is hot there will always be those willing to sell their souls to cool it off and bring the attention to themselves. This goes a ways to explain not only the media’s approach to creatine but that of the conservative medical establishment. All of this combined has led to great confusion over the safety of creatine usage.

For sure there are concerns regarding use.

Creatine is a relatively new phenomenon and, as such, long-term studies have not yet been completed. Therefore it is not possible to say with absolute authority that there are no potential creatine dangers.

Short-term creatine studies, however, have convincingly shown it to not only be effective but extremely safe.

The 7 Most Worrisome Side Effects Associated With Creatine

While further studies are needed before we proclaim potential creatine dangers to be null and void, there is little reason to believe it won’t measure up here as well. To this point creatine has been the most thoroughly studied performance enhancing supplement and has passed every test before it.

While studies continue to mount up showing supplementation to be extremely safe, anecdotally there have been reports of some scary health consequences. While anecdotal reports are not a reliable indication of anything, there is a plausible reason that the research would show creatine supplementation to be safer than it has actually become in practice.

The studies that repeatedly find no creatine dangers typically use a very high quality pure creatine monohydrate without additives. With the explosion of the supplements popularity, many manufacturers have sought cheaper manufacturing processes to gain a price advantage over their competitors. These processes and additives can mean that you are getting more than you know when you set out to supplement. And that extra stuff can be scary.

The cheaper powders (Chinese creatine and the like) are not only going to be providing less effective product, they can also throw some very dangerous chemicals into the mix.

The creatine I use and recommend on this site is Optimum Nutrition’s Creatine Powder. This product does not contain additives and uses creatine manufactured by Degussa, a large German company that is well respected for its manufacturing practices.

By all indications, creatine use should be very safe for healthy individuals who use the product responsibly. This means making sure that you don’t go overboard with your dosages and keep yourself properly hydrated.

Buying the cheapest creatine on the market is not a good idea as it can present additional side effects. As with all dietary supplements, buy at a reasonable price from a trusted manufacturer.

Creatine dangers are often misunderstood and reported irresponsibly by the media. Understanding the supplement and its true abilities can alleviate concerns and increase results.

Ultimately, that is an individual decision. It comes down to doing the research and deciding if you feel comfortable with it. My opinion is that creatine is safe and can be a valuable addition to an otherwise strong training program.

To help decide if it is for you, check the article, Should I Use Creatine Supplements?

How Glutamine Can Benefit Weight Lifters

Learn how supplementing with this anti-catabolic amino acid may help you preserve and build muscle.

The Effects of Creatine Supplementation

Learn how creatine works within the body to help the trainer gain weight and build muscle – What it can do for you and what it can’t.