You are here: Home / The Bodybuilding Specialty Program Reviews / My Review of “Blast Your Biceps”

For More Info
and to Purchase

The biceps are the showiest of the “show muscles” (those muscles you want to “show off” to others). Every guy out there wants to put a little more girth on their arms.  It is easily one of the top, if not the top reason that the average male hits the weights.

We all want big guns.

So, it isn’t much of a surprise that you can routinely watch random guys putting inordinate amounts of effort into arm development –sometimes in bizarre and funny ways.

I’ve seen more than one guy show up at the gym and do nothing but arm exercises for a few weeks (the same thing as screaming “I’m a beginner who doesn’t have a clue what I’m doing”) before disappearing never to be seen again.

Why do they disappear?  They quit because their arms don’t grow.

Bodybuilding can be hair-pulling frustrating.  Trying to get a lagging body part to grow isn’t easy.  Working it too little doesn’t work.  And working it too much at the expense of the rest of your body doesn’t work.

(Quick Tip: Working ONLY your biceps WILL NOT put significant size on them.)

To get your biceps to grow, you need an intelligent, reasoned approach.  This is what Lee Hayward delivers in “Blast Your Biceps“. 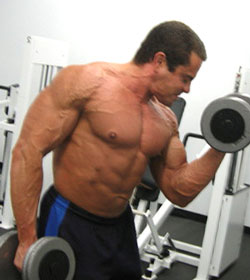 But, make no mistake, the program’s emphasis is on putting serious size on the arms.  For even the hardest of hard-arm gainers.

As you learn, biceps were one of Hayward’s toughest body parts to develop.  He had bad arm genetics.  And he provides pictures from early competitive bodybuilding competitions to prove it (hard to believe looking at him today).  The pictures show a guy with pretty impressive leg and chest development and… then a pair of spaghetti arms hanging to his side.

This gives Hayward a unique perspective on training the arms – He HAD to work hard AND smart to get his arms to grow and become proportional with the rest of his body.  The happy ending is that he is now sporting some pretty decent guns.

Blast Your Biceps takes you through all the exercises it uses in great detail.  Some of the exercises are straight forward and ones you know.  Some, however, are ones you’re unlikely to have ever encountered.  In each case, Hayward takes great care to make sure you are doing each exercise with the form that allows you to best stress the biceps.

There are some real usable gems within his tips for exercise form.  Very well done.

In addition to some unusual exercises, Hayward prescribes some unusual techniques to demand your biceps react (like partials and lockouts).  By unusual, I don’t mean stuff that a hardcore trainer wouldn’t necessarily recognize.  Just stuff that may get a great many puzzled looks in one of today’s “powder-puff” gyms.

One of my favorite parts of the program is Hayward ranting on the powder-puff gyms.  He goes so far as to prepare you for the inevitable confrontation you will have with a know-it-all personal trainer as you train with the program. 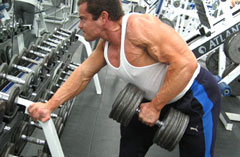 Following the herd is fine when it works but, when it doesn’t, you have to move on.  This is what “Blast Your Biceps” is about.  It takes those trainers who either aren’t responding to traditional arm training or simply want more and gives them the plan-of-action that demands their arms grow.

Hayward’s base prescription has you in the gym 4-days a week. Two of those days are spent working the rest of the body (Hayward emphasizes that “squats” are vitally important to developing your biceps) and two of the days have you training the arms only.

When the typical trainer has trouble getting arm growth he’s likely to seek out advice from the guy in the gym with the biggest arms. This may prove fruitless because that guy may just have arm genetics that practically guarantee him some serious guns.

It’s the guy that really had to work hard to get what he got that often turns out to be the best teacher.  In baseball, for example, you often find the best hitting coaches to be those who struggled to hit rather than the former batting champions.  They didn’t have the natural talent so they had to really study the art of hitting in order to stick at the game’s higher levels.

Hayward’s passion and knowledge for the subject are evident.  He does an excellent job of teaching the techniques that he used to overcome his own bad-arm genetics.

The result is a very good program.  Anyone who is struggling in the arm department or just looking to up their sleeveless game will get a lot from it.

For More Info and To Purchase