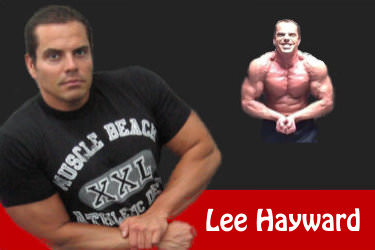 Inspired by Schwarzenegger in the Conan movies, Lee Hayward decided to get “huge”. He was 12 years old at the time.

The number of 12 yr. olds who have had similar aspirations likely reaches well into the tens of millions. What sets Lee apart from all the others is that his goal wasn’t a fleeting one, it took root.

Advancing from a before-school push-up program, to a York dumbbell set and on to gym training, Lee worked diligently towards his goal.  At the age of 17, he competed in his first bodybuilding competition. For the past 18 years he has continued to train and compete.

One look at Lee today will tell you that he did indeed reach his “huge” goal.

While studying computers in college, Lee was dismayed by the lack of quality bodybuilding instruction he found on the internet.  A new goal took root and over the last 14 years Lee has become one of the most well-known and trusted trainers online.

He has authored multiple bodybuilding programs including Blast Your Biceps which is rated 5 stars by this Guide.  Whether you’re reading, listening or watching stuff from Lee, you’ll discover contagious enthusiasm and invaluable bodybuilding knowledge.