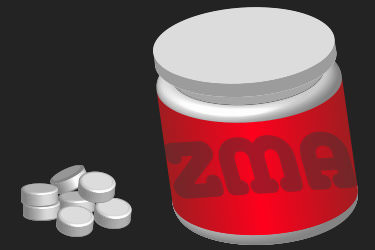 ZMA is a patented mineral formula containing 30mg of zinc and 450mg of magnesium along with 11mg of vitamin B6.

It was originally developed by Balco Labs (yes, that Balco Labs, the one Barry Bonds made famous). In their studies they noticed that athletes often showed mineral deficiencies in zinc and magnesium.

Zinc and magnesium are two minerals that can be very important to muscle building.

Multivitamins can contain identical amounts of these minerals but not cure the deficiency for athletes whereas the separate supplementation with ZMA products can.

To get the benefits ZMA can offer, it is of great importance to take it when there is no calcium in the stomach (not with milk or whey protein). The best time is within an hour of your bedtime.

People supplementing with ZMA often report great side effects – they sleep better. The importance of quality sleep to building muscle should never be minimized. It is this time that the hormones come out in full force and the majority of muscle is built.

What Do The Studies Say? 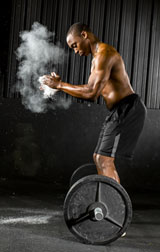 Several studies have shown great results for ZMA. Testosterone increases of about 30% and strength increases 2.5 times greater than placebo groups in one study.

There is criticism of the studies that show ZMA effective. These criticisms usually center around the fact that the test subjects are athletes on high protein diets. Increased protein intake (and resulting increased calcium intake) along with high-intensity exercise are likely two major contributing factors to these noted deficiencies. Because if you are training for mass gain then you are (or should be) on a high-protein diet and exercising intensely, these criticisms seem a little absurd.

Other criticism attacks some of the studies’ credibility based on their financial backing.

ZMA will always be looked at suspiciously because of the way it was originally promoted. Balco Labs basically provided performance-enhancing drugs to top athletes in exchange for ZMA endorsements.

Bonds, for instance, gave a lot of the credit for his dramatic physique transformation to ZMA. Obviously, this was not the case. ZMA certainly doesn’t have those kinds of capabilities.

For those trying to increase muscle mass and doing so through intense exercise and increased protein intake, ZMA may be worth a shot. Supplementing with ZMA will provide some benefits for those experiencing the deficiencies (but only those with deficiencies).

How do you know if you’re deficient?

Well, you can get tested. Or you can simply try the product and see if you notice any positive differences. It isn’t necessarily cheap but it isn’t outrageously expensive either (less than 50 cents a day).

ZMA supplements can help but they probably aren’t the place to start your muscle building supplementation.

Supplements such as creatine and glutamine are going to be of more value to a greater number of people. Adding these supplements to your muscle building arsenal on top of a solid diet and then checking out ZMA as your budget allows is a smart course to follow.

Getting Your Pre and Post-Workout Nutrition Right

Find out what nutrition you need at the most critical feeding times – before and after your workout. and doing your very best.

Discover the individual vitamins and minerals (C, B, E and Calcium) that are important to muscle gain and how to supplement with them.