You are here: Home / The Muscle Building Program Reviews / Did Vince Delmonte Really Gain 41 Pounds of Muscle in 6 Months? 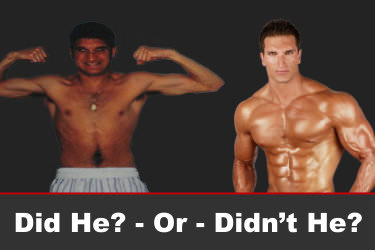 Delmonte has taken a lot of flak for this claim.

You won’t have to look long to find people on message boards and even on legitimate muscle building sites mocking Delmonte, saying that such gains are impossible and saying he is lying in an attempt to sell his No-Nonsense Muscle Building Program.

Some of this disbelief comes from accomplished and respected trainers, guys who should know what is possible and what is impossible.

The reality in the fitness/bodybuilding world is that anyone who claims natural gains in excess of 2 or 3 pounds a month is going to get flak from those who have convinced themselves that such gains are a physical impossibility.

I know this because I reported my own gains of 29 lbs. in 10 weeks and routinely get emails calling me a liar. But I get even more emails from site readers (hundreds and hundreds) reporting similarly impressive gains.

So, what gives? Is Delmonte a liar?  Am I a liar? Are My Site Readers Liars?

Delmonte’s gains are impressive but they aren’t unbelievable.  For every respected trainer who calls them impossible, there are numerous more equally as respected trainers who have experienced similarly impressive gains themselves or with their clients.

5 Possible Reasons For The Skepticism

It is a controversy in the fitness/bodybuilding world, with trainers lining up and digging their heels in on one side of the issue or the other.

Obviously, I’m on the side that says Vince Delmonte’s reported gains are plausible.

But what about the other side which includes several trainers I greatly respect?  Why do they call “foul” every time someone reports muscle gains in excess of a few pounds a month?

Here are some possible reasons for the opposition and some counterpoints…

The opposition often points to scientific evidence that points to it being impossible to gain more than a couple pounds of new, dry muscle tissue a month.

However, neither Delmonte nor anyone else reporting similar gains is actually claiming to gain “dry muscle” tissue.  No one ever claims their “dry muscle” tissue gains because there is no way to accurately measure dry muscle poundage without an autopsy (and few are that dedicated).

So the opposition scores a technical point here. But it’s a pretty lame point.

You can learn more about lean mass vs. dry muscle in the article, How Much Muscle Can I Really Expect To Gain?

Many impressive physiques took many years of hard work to build. It happened very gradually and the owners of those physiques are understandably a little skeptical when they hear of a beginner, like Delmonte was at the time of his initial gains, making such rapid progress.

Delmonte wasn’t the typical beginner, however. He was a guy who did a lot of research on exactly how best to build muscle and then applied that knowledge with extreme dedication and discipline.

A lot of the skeptics were direction-less when they first started training.  I think many such trainers would be shocked by the gains they could make if they could go back in time and apply their current knowledge and dedication to their bodies in an untrained state.

Their results may make them think themselves liars.

Most of the astonishing gain claims come from beginners, guys who haven’t trained much at all previously.  In Delmonte’s before pictures, you can clearly tell he hadn’t been training regularly.

When you take a complete beginner – a young male whose hormones are muscle building optimal – and put them on a solid program designed to build maximum muscle mass – a program like NoNonsense Muscle Building – that beginner is going to make gains that a more experienced trainer can only dream about.

No one is suggesting that a 220 lb. guy who has been training hard for the past 10 years should realistically be able to put on 40 pounds of additional mass over the next 6 months. Delmonte wasn’t suggesting he could keep on gaining 40 pounds every six months as long as he desired.

I think many experienced trainers forget just how responsive a young body can be when suddenly exposed to a solid muscle building program. They forget that the first pound of muscle you put on really is relatively easy (but as you advance, each additional pound you put on becomes harder and harder).

That’s just human nature. Success brings out the “haters” – people who think that they are just as good as you and are frustrated that they aren’t receiving the same notoriety or financial rewards.

We live in an era where out-of-the-ordinary athletic accomplishments are often chalked up to steroids (thanks Mark, Barry, Lance etc.).  Even just slightly incredible feats are greeted with a chorus of “’Roids!!!”.

I think people sometimes forget that athletes did amazing things before steroids were so commonplace.

Is a skinny, untrained twenty-something who reports putting on 41 pounds of mass in six months good reason to immediately yell “Steroids!” or “Liar!”?

Some clearly think it is.  I disagree.

I do understand the skepticism.  A healthy dose of skepticism is needed to navigate the world today — especially the web.  However, sometimes people go overboard with their skepticism. 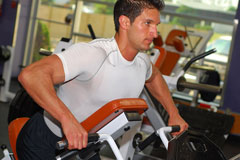 The types of gains that Delmonte reports are extraordinary.  I wouldn’t tell the beginner that such gains were common or to be expected. But they are not unheard of; they are not impossible.  Not when going all out with a solid diet and training plan.

Those of us who have experienced similar gains and witnessed others do the same are baffled by all the fuss. The only reasons I can come up with for the strange controversy are listed above.

What Should I Be Looking For In A Trainer To Help Me Gain Mass?

Vince Delmonte is one example of a trainer that I really think does a great job.  His No-Nonsense Muscle Building program is rated with 5 Stars by this site (see the review here).

What makes Delmonte a good trainer, however, isn’t just the personal results he’s achieved. Among other things, a good trainer also has to have experience training others and have the skills to effectively teach what he knows.

Find out all you need to know when looking for training help – 6 Things To Look For In A Mass Gain Personal Trainer.

Discover the top zero-cost ebooks and tools that can help you increase your bodybuilding understanding and results.

Find information, recommendations and links to all of the supplement reviews.