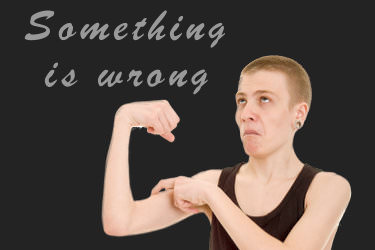 If you ever get around a bunch of accomplished trainers, take note that the conversation will almost always turn to the muscle building blundering that once stalled their progress. It becomes a competition to see who was the bigger idiot as a bodybuilding beginner.

“If that guy ever figures it out, he is going to be able to tell some funny stories.”

Hopefully that guy figures it out before he gives up.

There are an infinite number of muscle building blunders to be made.  But the one that virtually all beginners make… 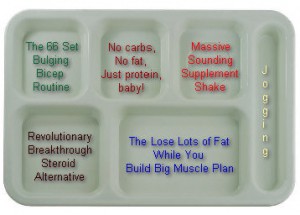 What is cafeteria bodybuilding? It is when beginners sort through the various sources of information and then incorporate into their program only those things that “sound good” to them. And they walk on by those things which don’t sound so appetizing.

They take something from this article and something from that one, they get some advice from the guy on the message board and then some more from “the guy at the gym.” They get a little bit from some stuff written by a pro bodybuilder (actually, probably his ghost-writer) and they get a little more from the quack science of the supplement manufacturers. They then pull it all together with the “beginner’s logic” that they brought with them and…

What they end up with is a program that is all over the place, everywhere except precisely targeted at muscle gain.

The “big picture” gets lost in the maze of misinformation.

The amount of bodybuilding information out there is staggering. Thousands of sites and message boards and millions of pages. Trying to evaluate all of it presents a major problem for even the seasoned bodybuilder.

It really isn’t the lack of access to the right information that causes the majority of beginners to fail so miserably at gaining muscle. It is those trainers’ inability to identify and avoid the bad information.

The right advice is out there but residing right next to it, and looking suspiciously similar, is the wrong advice.

With cafeteria bodybuilding, it is just difficult to end up with a program that isn’t based at least somewhat on myth, misinterpretation and pure crap. And that stuff will simply destroy your ability to gain maximum muscle mass.

In the final analysis, the basic recipe for significant muscle gain isn’t anywhere near as complicated or time-consuming as beginners imagine it to be.

The best opportunity to come out of your corner and hit something solid with your very first swing, instead of flailing away as most trainers do?

Doing the above three things won’t make you popular around the gym’s water cooler in the future.  You won’t be able to participate in one-upping the next guy on how dumb your beginning muscle building efforts were.

You will, however, get much bigger much quicker.

Getting on a good program is critical to maximizing muscle gain, but it isn’t a guarantee…

Trust me when I tell you, solid plans are screwed up by newbies all the time. It’s very easy to ease back into cafeteria bodybuilding even when the path to big muscle gains is right under your nose. Check the 4 Steps To Achieve Maximum Mass With Your Program to make sure you stay on track.

Learn how to use attitude, visualization and mindset to positively influence your muscle building results.

Choosing The Right Program (to Catapult Yourself To Big Muscle Gain)

Find out how to pick the right program for you based on your training level.