See all the exercises at the:
Weight Training Exercises Database

On preacher bench, adjust so that armpits are at top of pad and back of arms are comfortably against the pad. The chest is firmly pushed against padding. Raise barbell as far as possible (or until right before gravity takes over and tension on the biceps is released) lower until arms are nearly fully extended.

Keep the rest of the body as still as possible while performing the exercise. Bench adjustment is very important to good form. You don’t just want the elbows on the padding, you want the upper arms from armpit to elbow comfortably glued to the front padding throughout the exercise. Keep chest into the back padding, armpits at top, and lean into the exercise in order to isolate the biceps. 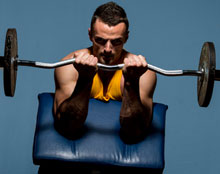 The purpose of Preacher Curls is to effectively isolate the biceps and minimize the role of other muscle groups. However, in gyms across the world, bad form by trainers attempting to impress other trainers with how much they can curl often destroys this purpose.

Mistakes you see most often result from improper preacher bench adjustment as addressed above. On seated Preacher Curls, you will also often see trainers inexplicably standing up a bit as they lower the weight and then sitting down abruptly as they raise in an attempt to sling-shot the weight up. People also have a tendency to try and involve the shoulders in the lift.

Again, keep the body still, keep upper arms against padding and keep a slow, controlled motion to get the best results from preacher curls.

Can also be done standing.

A straight barbell may be uncomfortable and put some strain on the wrists for some (probably most people). Using an EZ-Curl bar can alleviate this problem.

Preacher Curls get their name from the image of preachers leaning over their pulpits and delivering fiery sermons.

6-12 the majority of the time, trying higher or lower reps on occasion.

See all the exercises at the:
Weight Training Exercise Database

Diet To Gain Weight: How Much of What to Eat?

Find the guidelines for picking the best macronutrient ratios and the calculations to perform in order to get your muscle diet mapped out.

Check your program against this checklist and see if you are doing as much right as possible and getting the best possible results.

See all the articles from the Guide to Mass Gain Training