See all the exercises at the:
Weight Training Exercises Database

Standing, holding dumbbells in both hands with an overhand grip, with elbows slightly bent, raise one arm directly in front of you until it is parallel with the floor or a little higher, lower and then do the same with opposite arm.

Palms are facing behind you at the bottom of the exercise and then straight down at the top. Using a “hammer grip”, palms facing inwards (facing each other) is acceptable. This grip will cut the side delts pretty much out of the exercise and place more of the focus on the front deltoids. Most commonly, trainers use the palms down technique – likely because the side delts are hit less with other exercises in a basic workout whereas the front delts get good work (such as with the Military Shoulder Press).

Resist the urge to bend back and let gravity help with the lift. Don’t swing and let momentum do a portion of the work. These are common errors you will see in those performing front raises. Work on getting your feet positioned for a good base to help prevent this (feet shoulder width apart and knees slightly bent). Shoulders are back and chest out, back is leaning slightly forward. From there you want only the arms moving with the rest of the body remaining largely motionless throughout the exercise. 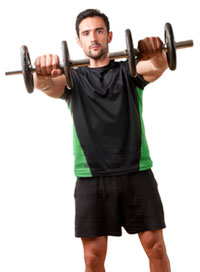 Like with all raises, do not lock your arms on this exercise. You want a slight bend at the elbow, just barely to keep it from locking out. You can do front raises with the elbows bent at around 90 degrees which will allow you to use greater weights due to leverage. No big advantage to doing it this way, it brings the biceps into the exercise in a minor way and might make you feel a little stronger since the weights are heavier.

The raise should go directly in front of the shoulder. It should go to shoulder height or a little higher (eye level) and back down. Continuing the raise up and over your head is sometimes done. As the weights get above shoulder level, the traps get more involved and tension is released from the front delts. The minor positive impact this might have on your trap development isn’t generally considered a good trade-off for decreasing the front raise’s effectiveness on its target muscle (front deltoids).

Dumbbell Front Raises can be done seated but are most commonly done standing.

6-12 the majority of the time, trying higher or lower reps on occasion.

See all the exercises at the:
Weight Training Exercise Database

More than 50 of the top programs reviewed and rated. Find out which ones build muscle and which ones are just talk.

Discover the most important pieces of equipment your home gym will need, everything from power racks to weight lifting gloves.

See all the articles from the Guide to Mass Gain Training