You are here: Home / Guide To The Muscle Building Diet / The Glycemic Index, Insulin and Bodybuilding 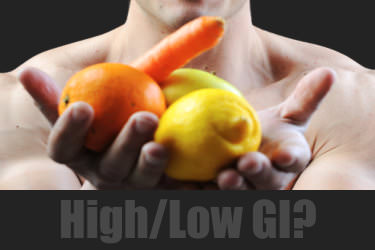 The Glycemic Index (GI) is a measure of the after-meal response foods have on blood sugar levels.

Foods are measured as compared to straight glucose. Glucose’s rating is 100 so a food such as milk with a rating of 34 means that milk will move into the blood at a rate about 3 times slower than straight glucose (100/34 = 2.94).

These are useful measurements because some complex carbs have very high GI ratings (such as a baked potato at 94) and some simple carbs have a low rating (an apple at 40). So, it becomes helpful to go beyond the typical simple and complex carb differentiations and know the GI values of the foods you are consuming.

Why is this important for bodybuilding? For building muscle mass? To understand the importance of the Glycemic Index to the muscle building diet, it is first important to have a basic understanding of insulin.

Insulin is a hormone. It is released into the blood by the pancreas as a way to regulate blood sugar levels, doing so by shuttling the sugars (nutrients) into cells. The two predominate types of cells these nutrients are shuttled into are fat and muscle cells.

Without insulin, the nutrients could never reach the cells and the cells would therefore die (and so would you).

As you can probably guess, insulin is something that grabs the attention of all dieters, whether their goals are fat loss or muscle gain. The higher the blood glucose levels, the more insulin released.

Keeping a balanced insulin level is desired because it reduces the likelihood that the fat cells are excessively nourished (simple carbs equal high GI values which equals high insulin release which can create greater fat gains). Many weight loss diets focus on keeping insulin levels low for this reason.

On the other side of the coin, the more insulin present the more nutrients are likely to reach and nourish the muscle cells. In fact, many consider insulin to be the body’s top anabolic hormone. Some bodybuilder’s looking for big muscle gains actually inject insulin (dangerous, and definitely not recommended).

How Should You Use Your Knowledge of Insulin To Help You Move Towards Your Bodybuilding Goals? 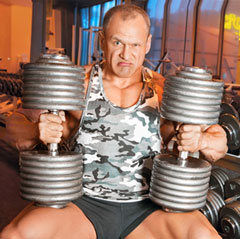 So, where does this leave you, the person trying to gain lean muscle weight while limiting body fat gains?

Basically, you want to increase your insulin levels when it is more likely that the nutrients are going to muscle cells and decrease your levels (balance) when it is more likely the nutrients are finding homes in fat cells. This speaks to the importance of spiking levels (loading up on simple carbs) pre and post-workout (the times when muscle cells are going to be the most receptive).

It also explains why it is a good thing to mix your creatine with high glycemic index drinks – the increased insulin helping increase creatine absorption.

It is helpful to know the ratings for some of the common foods you eat but understand these numbers have some limitations. They assume that you are not eating anything with the food being rated which will affect the relevancy of the numbers. 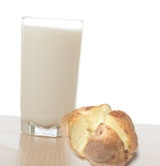 Eating a high GI food accompanied by protein portions, for example, will slow the release of blood sugar. Additionally, metabolism and other individual factors will affect the ratings.

Unless you are eating the foods by themselves, the Glycemic Index ratings will not be accurate.

Another number to know is the Glycemic Load (GL). While the Glycemic Index tells the speed with which a food’s carb content converts to glucose and enters the bloodstream, it doesn’t take into consideration the amount of carbs in that food.

The glycemic load of a food is that food’s index multiplied by its carb grams and divided by 100. A GL of 10 or less is considered low, anything over 20 relatively high.

To find the glycemic ratings of foods, go to the University of Sydney’s GI Database. Some numbers from that data…

These are good numbers to know and potentially much more valuable than the simple/complex differentiation. How detailed you want to get in your diet planning is up to you.

How Much Attention Should You Be Paying To The Glycemic Index?

When considering pre and post-workout food choices it is a good idea to consult the Glycemic Index.

Outside of these times, you should be eating balanced meals which will limit the value of these numbers. Simple/Complex differentiations should suffice for making the majority of your carbohydrate picks and keep you focused on the “big picture.”

Anabolic Steroids: The Good, The Bad, And The Ugly

Find out what they are and what exactly they do to help the body put on muscle mass.

My Sample Weight Gain Diet Plan From A to Z

See how I put my muscle building diet together, from design to implementation, including a sample day of meals.