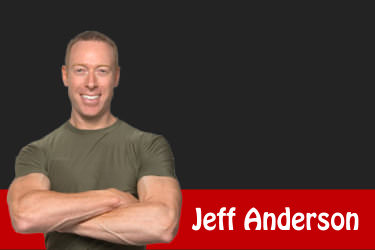 You have to respect a guy who gives a “shout out” to Oprah as in inspiration to his Optimum Anabolics Program. He says the ideas behind it came to him while he was watching Ms. Winfrey’s show.

It takes some guts for a bodybuilder to admit to watching that show. And even more man points are at risk when you say it inspired you.

But, when you read Anderson’s stuff, it makes sense. You figure out that he is the type of guy that is constantly thinking about muscle building. He is always looking for new and innovative ways to gain muscle, ways to fool genetics and get just a little more mass to stick.

He doesn’t just think the thoughts; he applies the science and works out the details.

So, if anyone could come up with bodybuilding program in the midst of a Peggy Bundy afternoon, it would be Anderson.

(For the record: He claims it was his wife who was watching Oprah and he was just “passing by”).

Jeff’s attention to the minutia of muscle building has earned him the nickname of “The Muscle Nerd.” It has also earned him a lot of praise for providing trainers with results-producing muscle programs.

The highlight of his offerings provides trainers a much bigger bang for their supplement dollar. Homemade Supplement Secrets teaches you how to mix your own supplements. By doing so, you can save money AND create more potent supplements than the supplement companies offer.